The annual (apart from last year) Good On Paper Party returns on the 5th February 2022 for vol.6 taking place across three venues in the heart of Stroud - the Sub Rooms, Ulter and the Stroud Congregational Church.

The Good On Paper Party acts as a fundraiser for the monthly Stroud arts and culture publication (which continues to operate as a part-time fully independent project) whilst bringing forth a hoard of local artists, musicians, DJ's, comedians and poets to celebrate the vibrant, creative scene which Stroud is increasingly becoming renowned for. As well as championing all things local the magazine also invites performers from further afield to join the line-up resulting in an eclectic mix of live music, art and spoken word…

THE SUB ROOMS
The live music stage at the Sub Rooms features a headline DJ set by BBC Radio 6 Music presenter and DJ Tom Ravenscroft usually found behind the decks at major UK festivals including Glastonbury, Latitude and Green Man to name a few. Tom introduces quality new music to listeners around the globe via a number of projects including his regular Friday night show on BBC Radio 6 Music, and mixes for Worldwide FM, NTS and Primavera Radio. Always showcasing music hand-picked from as many far flung places as possible, a mish mash of sounds painstakingly put together into a coherent and unique mix. Colossal Squid the new project by Adam Betts (Jarvis Cocker, Three Trapped Tigers, Goldie, Squarepusher) who has gained a reputation as one of the most innovative drummers in modern 21st century music returns to Stroud following his still talked about, mind-blowing set at the Good On Paper Party in 2019. Also on the bill includes the avant-garde indie, bubbling electronica and cosmic psychedelia of Voka Gentle whose recent single featured none other than Wayne Coyne from the Flaming Lips. Eight piece instrumental Ethiopian jazz/Afro-beat/prog collective Tezeta (ft members from Yama Warashi, Count Bobo, The Evil Usses, Spindle Ensemble, Run Logan Run and more...) , alternative singer songwriter Mara Simpson who recently featured on the We Come from the Sun album release by Cerys Matthews and Hidden Orchestra and Neighbourhood - the Sub Rooms resident promoters/DJ's/vinyl enthusiasts Dubbu and Mendoza (Stroud Block Party, Uptown, Overproof).

ULTER
Over the road above Tomari-Gi, Stroud’s buzzing new venue Ulter welcomes a DJ set by all female Morris Dancing side Boss Morris who has previously hopped on stage with the likes of Hot Chip at Glastonbury Festival,Shirley Collins on her Lodestar tour and featured in music videos by Fat White Family and Sweet Baboo and regular Good On Paper collaborators Sean Roe and Tom Monobrow from independent record shop and label Sound Records. Live sets include a homecoming gig from ASTRYD; brothers Jo and Tomáš Kašpar who have made a name for themselves as resident and founders of Dialogue, putting on joyous, experimental, DIY parties in Bristol and London, creating safe inclusive spaces and celebrating under-appreciated LGBTQ+ acts. Collaborative electronic music project Orbury Common, birthed by Emlyn Bainbridge and Josh Day-Jones through their wonderment towards supernatural fanaticism and British nostalgia return and the uncategorizable Unicorn Ship Explosion - a new venture by music producer/sound designer Sasha Lewis who has previously worked with the likes of Four Tet and Jon Hopkins.

STROUD CONGREGATIONAL CHURCH
The seldom used Stroud Congregational Church next to the Sub Rooms becomes the Good On Paper Spoken Word Stage for the evening curated and compered by none other than stand-up poet and sustainable nihilist Jonny Fluffypunk inviting a bunch of friends from far and wide...Headlining the evening is the award-winning stand-up comedian, actor and writer Ed Aczel - the king of anti-comedy. Artist, comedian and poet Clare Ferguson-Walker returns to Stroud having previously appeared at the Stroud Theatre Festival and the Good On Paper Party vol.2, Swindon's number one poet, rapper part time car washer and Paintballer Odious Vex heads down the A419 plus Tottenham's singing comedy sensation Wobbie Wobbit and more tba...

INSTALLATION
Dan Rawlings is a contemporary British artist born in Watford in 1979, he grew up in Essex and currently lives and works in Stroud. A sympathy for unloved and forgotten relics and a fascination with nature’s resilience have inspired him to create visions of a world where man’s impact is being slowly reclaimed by nature. Notable projects include the sculpture ‘nature delivers’ based on the wreckage of a ford transit van or ‘Short Haul’ an elaborately hand cut light aircraft shown at the Urban Nation museum in Berlin during the 2019 Biennial. His signature works cut from vintage hand saws and street signage can be found in collections around the world. 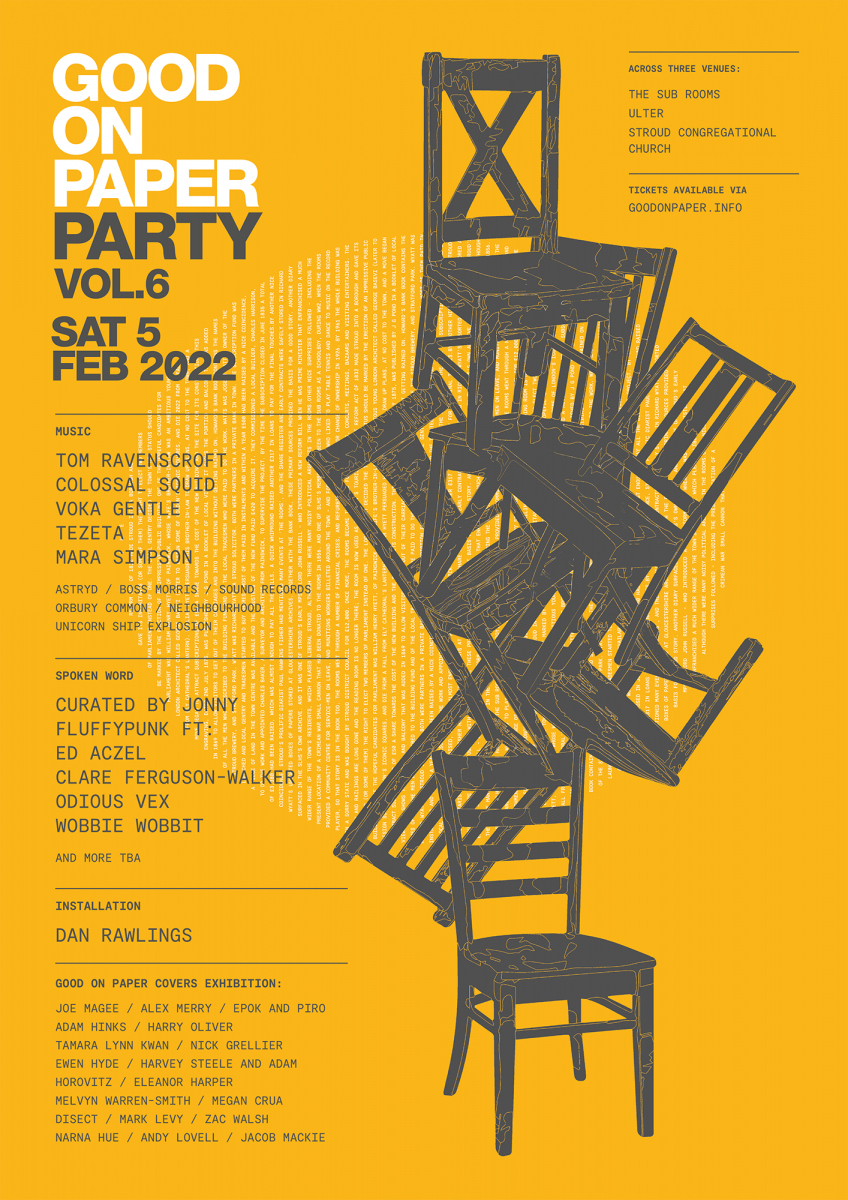